Your guide on different scales

So you’ve decided to have your very own collectibles of miniature cars but came down to one question: What are the sizes? This brings us to our topic about scales and your preference in choosing the right scale model for your collection. Nevertheless, this is not limited to only cars but also applicable to busses, trucks, motorcycles, etc.

What is Scale model?

It is defined as a physical representation or a copy of an object that is larger or smaller than the actual size being represented while preserving the exact appearance of the object being replicated. Very often, the scale model is smaller than the original and used as a guide to making the object in full size. Scale models are used in many fields including engineering, architecture, film making, military command, salesmanship, and hobby model building.

How does scale works?

The “scale” of a model is its size compared to the size of the “real” version. For example, a 1:24 model, the real version is 24 times larger in size than the model or 1:1 in scale. 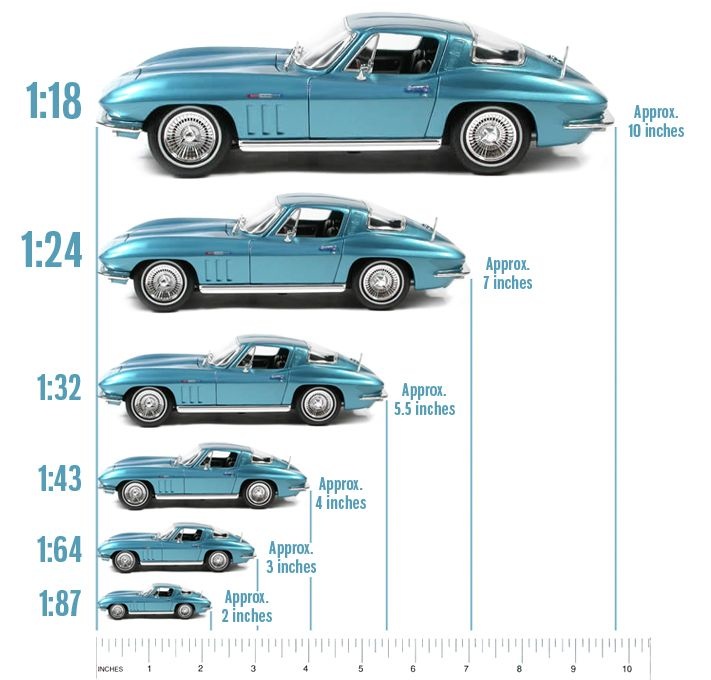 Let me give you some more insights on different scales:

1:18 scale- This is a traditional scale commonly used for diecast automobile models, military vehicles, armor, and aircraft. They are large and are often intricately detailed with moving parts not regularly seen on smaller scales. They are approximately 8 to 11 inches (18 to 20 cm) long for automobiles.

1:24 scale- A scale that is built and collected by both children and adults. Previously, a very popular scale for larger models. They are approximately 7 inches (17.78 cm) long.

1:32 scale- Formerly known as the standard size and once so common for toy trains, autos, and soldiers. It is approximately 5.5 inches (13.97 cm) long.

1:43 scale- The most popular scale for diecast model cars and traditionally known as the "Collectors Scale". It is approximately 4 inches (10.16 cm) long.

1:64 scale- This scale can be easily held by small hands. Matchbox and Hot wheels use this scale to describe their vehicles. It is approximately 3 inches (7.62 cm) long.

1:87 scale- It is the most popular scale of model railway in the world and is approximately 2 inches (5 cm) long.

So there you have it. I hope this page enlightens you on how you want your model car size to be. For different car models on different scales, our webshop offers a wide range.

Your cart is empty